Just exactly how have I anti-aged?

My girlfriend said to me over the weekend that I looked great.  She keeps telling me I don’t look my age and I keep telling her this is how 57 is supposed to look.  🙂  I told her that I didn’t use to look this good.  5 years ago, I looked a lot older.  And 5 years before that, older still!  I am grateful to be experiencing anti-aging!  I see it in the mirror and feel it in my body!

So she asked me exactly what differences did I experience. 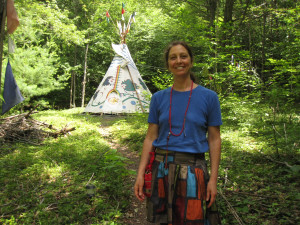 Time to take the tipi down!.

So I’ve been thinking about it.  10 years ago, I was heavier, my hair was pretty gray (and not so pretty, actually).  It was advanced gray.  My dad, who doesn’t have to be as polite as other people, would say to me, “Don’t you want to color your hair?”

Besides how my hair looked,   I used to have these dark circles under my eyes.  I was getting sick frequently with mono, bronchitus, colds and that had been going on for about 20 years prior.  I’d spent about 10 years with chronic fatigue.  So my energy felt like I was 90.  I was achy all over, and had problems with pain in my finger joints, even a trigger thumb.

And here’s the differences.  Since USANA nutritional supplements,

4. dark circles under my eyes, gone!

5. my skin & hair have a healthy glow

6. joints & back no longer ache

Is this anti-aging?  Call it whatever you like, this is my experience.

Right now, it’s Columbus Day and that means time to take the tipi down!  Most summers I spend almost every weekend in my tipi on the beautiful land of Padmasambhava Buddhist Center http://www.padmasambhava.org/

I drove up yesterday, admiring the intense fall colors and had the fun of antique shopping along the way.  Walton, NY is sprouting antique shops left & right!

I got most of the tipi packed up and put away in my car and drove home.  This is when I really appreciate my healthy joints and energy.  This kind of thing used to kill me in my “old” days.  Now, it’s just fun!  It was a refreshing break from the stress and intense emotions of recent weeks.

“What am I supposed to do?”

Forget that osteopath, Carina!  Just because he didn’t know how to help you, doesn’t mean ALL cranio-sacral therapists can’t help you!

There are about one million things I can do, even if CranioSacral Therapy (CST) were not to work.  First, I’d want to go to a CS therapist who believed he COULD help me and give that a chance.  For a severe injury, that means minimum of 10 sessions, each session being at least 1 hour long.

There are lots of different osteopaths out there and some are excellent with manual therapy and some are not.  I don’t know which category that guy you went to is in.

Let’s say CST didn’t work for me.  Why doesn’t it work for me?  It works for lots of people with similar isssues.  So I would want to work on 2 fronts.

The body heals itself perfectly well if it has the proper nutritional support.  That is key.  That’s why my clients get better results if they go on an aggressive nutritional program along with the manual therapy.  I trust USANA because it worked for me and it has lots of 3rd party endorsements of its scientific basis and potency/purity guarantee.  I’ve seen my clients On it, do much better than my clients NOT on it.

Next, I want to explore the psycho-emotional reasons I might not be getting better.  So I seek out someone who does hypnosis, time line therapy, emotional freedom technique (EFT), Somato Emotional Release (SER–often done with EFT), Family Constellations or some mind-body therapy.  I do these with my clients and they find it helpful.

There is lots more.

Carina, have you tried all these yet?

Don’t give up hope!  There is an answer to all my challenges as long as I don’t give up!  Let me know what happens, Carina!

Young forever? Well, let’s see how far we can go…

Last night my daughter and I met at a dance concert in NYC. It was a remake of a dance from the late 80’s and the choreographer was someone I’ve known as a friend and been a fan of since the ’70’s. The young dancers were exuberant throughout the work and the dance looked familiar and fresh at the same time.

At brief interludes during the performance, my friend made almost furtive appearances upstage. He posed, appeared to be casually observing, and then would launch into private dances behind the choreography going on between him and the audience. It was a riveting juxtaposition of youth and authority. He moved with power and grace and a reserve absent from the younger, full-out explosive energy.  It was very beautiful.

After the concert, we hung around to chat with friends and congratulate the dancers. I observed my choreographer friend across the room. I was just a little surprised at his appearance in the light of, well, not day, because we were in the theater, but normal light rather than theatrical half-light.

He’s a good-looking man, trim and athletic, no doubt about that. But, saying that, there was still a slight bulge to his waist and a puffiness to his face.  And he was a man who was working out every day, vigorously with young dancers to keep up with and train!

You might say, what can you expect from someone around 60? I expect better.

That puffiness is not age, because I had it when I was younger and now I don’t, and I only work out maybe 10 minutes a day, not hours like he surely does.

That puffiness is inflammation and, when it’s present, it’s aging us faster than necessary. It’s a sign of the body becoming less able to process energy, which comes in the form of sugars from our foods, whether you eat healthy or junk. If you eat healthy, you get healthier sugar; eat junk and you get unhealthy sugar, and the inflammation is worse. But it’s still sugar the body metabolizes and we do it less efficiently as we age.   Inflammation picks up and we get these bloated bellies and skin.

Unless we do something about it. Vitamins are an answer, but not the poor quality stuff found so easily in all our stores.  The anti-oxidants in vitamins neutralize this inflammation and the bloatiness disappears.

Unfortunately, most of the stuff in the stores is good nutrition in advertising and labels only. It’s all great stuff, according to the labels. But in the body, these vitamins usually do diddly squat.

Profit is usually the main motivation of the companies producing most of our vitamins.  So ingredients used must ensure profit, not health for the person taking them. The vitamin companies are not required to adhere to standards for quality, potency or absorbability of ingredients.

The best products are usually no in the stores, and if they are, it’s like looking for a needle in a haystack. My story is, I found USANA and I got myself a waist like I never had before. 🙂

I also got myself almost unlimited energy, and I push it to the limits.  I went from being someone who was always tired, to someone who is always on the go, with joy.

When I finally was able to greet my friend, after most everyone else had gone, he said to me, “Wow, you look great. What are you doing?”

I said, “I’m happy to share it with you. Anytime.”

“What is it? A secret elixir?” he laughed.

I gave him a card and said, “Let’s talk. We want to keep you dancing for a long, long time!”

It’s not that we are being vain about having a tight tummy or beautiful skin. It’s just that  a tire around your belly and even slightly puffy skin is a sign that the body is breaking down at some level, it’s not optimum.

So take a look at yourself in the mirror and ask, “Is this the best I could be doing right now?”  What if USANA worked for you like it did for me, wouldn’t you want to try it then?