Trauma, Death, And A Summer Paint Job in December: A Year In Review

It’s a quiet morning caused by an unexpected snowstorm.  I’d like to be full throttle in renovating my home, but scheduled workers didn’t show.  It’s the perfect moment for the quiet introspection I’ve been dreaming of. 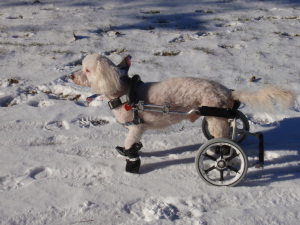 Last December at this time, my dog, Max was in a doggie wheelchair and the vet told me he would never walk again.  The family holiday powwow was to schedule one sibling to be with Mom 24/7 because she had just completed her cancer surgery and needed round the clock assistance.  Mom and I were debating the value of life at 4 AM on a regular basis.

The surgery to remove the tumor from under her right cheekbone meant removing her right cheekbone, her right eye which had been invaded by cancer, and, well let me explain it this way. If you put your finger touching the middle of the roof of your mouth, everything to the right had to go.

Shortly after the surgery, they put in a very refined denture that mimicked the roof of mom’s mouth.  Without that, she couldn’t talk or eat.  She was trying to figure out the care of it, she was exhausted and beat up from the surgery.  The surgery impacted her hearing.  She was completely deaf without her hearing aide and the hearing aide was working inconsistently.  Her sight was much worse.  She had trouble breathing and frequent nightmares.

I spent nights with her at the hospital and she would wake from nightmares at 2 or 4 AM.  She would say how if she knew it was going to be this bad, she would rather die.  We would debate the merits of living and dying.  I would interject Emotional Freedom Technique (EFT) to release some of the emotion, much of it, fear.

Surgery can result in a form of post traumatic stress disorder (PTSD).  The patient’s subconscious feels it is being attacked and doesn’t recognize this is a life-saving measure.  Mom’s nightmares were part of that syndrome.  Fortunately, I was able to get in there quickly with EFT.

When we got home, Mom slept for a while sitting up in a chair in the living room.  It was hard for her to breathe lying down.  By then we took turns staying with her.  During my turns, we often had those 4 AM discussions and EFT.

I briefly mentioned that my dog was in a wheelchair.  Just as my mom’s surgery was scheduled, my dog, Max, became paralyzed.  It was just before Thanksgiving.  He’s a little Bichon and the vet said a lumbar disc had dislocated.  The vet also said, after a couple weeks went by & Max didn’t show improvement, that he would never walk again.

I have to thank my good buddy, Steve Kowalczyk, for nursing Max.  I was pretty full time taking care of Mom.  So Max went to Steve’s house and got excellent nursing.  It was a lot to ask of anyone.  Max couldn’t get up at all on his back legs, so he had to be cleaned up several times a day and carried outside to relieve himself and held.

So in the back of my mind were life and death questions about Max as well.  I didn’t entertain them much, though.  Somehow I knew Max would be well and Mom would, too.

Maybe I felt that way because I was able to help them.  Mom would never take my USANA vitamins before.  But in her helpless state, I drowned her in them the best I could!  I ground them up and put them in her food, her drinks, her deserts.  I did the same for Max.

And I was able to do EFT, CranioSacral Therapy, Lymph Drainage Therapy, and Liss Stimulation, every skill I knew from my work I employed for both of them.

Around this time last year, we took Max to get his wheelchair.  As soon as he stood in it, he was so happy.  Since there was no weight on his back legs, he began moving them.  The woman at the custom wheelchair shop said that indicated that he would probably recover.

Max recovered and he’s still recovering.  At Thanksgiving, my daughter and I took a long hike in the woods.  I debated with myself whether to take him, as he hadn’t done any really long walks.  It was one of our favorite places we used to walk.  So I took him and he kept up and enjoyed it. 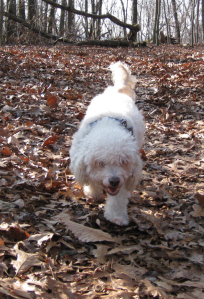 Mom is back to her energetic self that our family really hadn’t seen in over 10 years.  She had gotten really overweight and was on medications for high blood pressure and cholesterol.  For about the last 6 years, she had lost her ability to walk any distance at all.  She had gone from a person who wore all her children out shopping, to someone who couldn’t make it across a parking lot.

After the surgery, she got her energy back better than ever.  She lost about 70 lbs and she did it healthy, not losing muscle.  She ran around taking everyone shopping and running the show this Christmas.  She’s still taking her vitamins on her own, just in case they have something to do with her anti-aging energy boost. 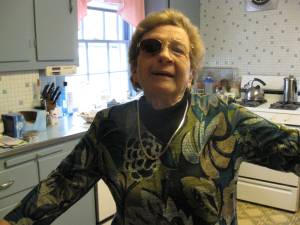 Mom clowning around in the kitchen Christmas day. 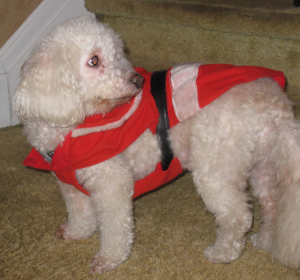 The only crazy thing was, well, actually there were 2 crazy things.  My ex-husband, the composer, Michael Galasso, died on September 9 and my brother, the cardiologist, Michael Pasquale, died September 17.

Mike Galasso had been struggling with his health for years and died of a heart atack while my daughter, Catherine was visiting him at his home in Paris. She had 5 weeks with him and he died the day before she was to fly back to NY.  They were very close and it’s been very tough for her.

She’s a choreographer and she’s been able to channel her grief in very interesting ways through performances she’s given in both NY and San Francisco.  It’s been both tough and inspiring watching her.

Out of the blue, while Mom was in recovery mode in the spring, my brother, Mike got diagnosed with cancer and died in September.  My brother, Tony, and I were together at Mom and Dad’s when Mike died and we gave them the news.  It could be the hardest thing I’ve ever done. 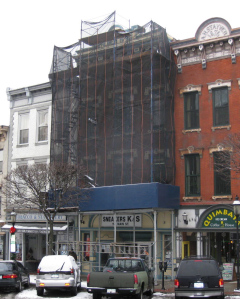 Summer paint job in the snow. It’s all done & ready to go!

So here I am.  The snow is on the ground and on the scaffolding that stands in front of my house.  I live and have an office in a 3 story brick & cast iron building that dates from 1876.  Painting the cast iron and pointing the bricks, sprucing up the rusting facade, was supposed to be a summer job.  The summer job turned into a winter job, the contractor just finished yesterday, after many delays.  The scaffolding is supposed to come down the first clear day we get in the new year.

I’m deep into interior renovations of my home & office.  It’s planned to be a winter job and be done by March, in time for Chinese New Year!  I’ll keep you posted.