The Dream Machine Revs UP

It’s night.  It’s quiet.  I’m in one of my favorite places.  The tipi.  I arrived on the land after dark and the sky was one of the most beautiful I’ve ever known.  I should have guessed it would be special.  I saw a rainbow on the way up.  And then a bear. 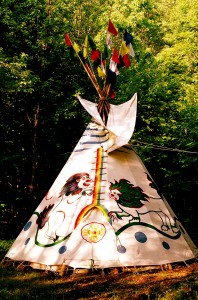 Home away from home–tipi in the Catskills.

What did I say?  A rainbow, a bear, and the night sky lighted by more stars than I’ve ever seen before all within the same few hours?

What kind of blessing is this?

I’m glad I thought to bring my winter jacket.  It was 90 degrees all week, but I just thought as I was leaving, “Bring the jacket.”  I have both a sweater and the jacket on and it’s quite comfortable.  I have a pile of blankets on top of 2 sleeping bags.  It’s chilly, which is why the night sky is so clear, exposing every star ever made.

I was just saying to my friends, “I want to go to Africa, to safari, and see the wild animals.”  Then a few minutes later, I’m in my car and a bear runs across the road in front of me.

How’s that for a quick response from the Universe?

I stopped the car and peered into the woods where the bear had gone.  He stood there and turned to look at me.  We studied each other.  I began to think maybe I’d better move along, in case he decided to come back.  But we just looked until he turned and began to step slowly deeper into the woods.  When I could no longer see him, I drove on. 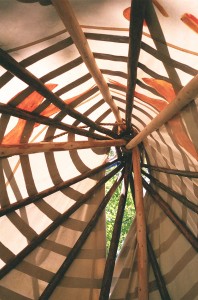 The view looking up

11 years I’ve been coming here and I’ve never seen that bear before.  I’m taking it as a sign.  Things will be happening faster now.  The Dream Machine is picking up speed.  More about this later.  Good night.  I won’t be able to post this until tomorrow.  No internet in the tipi.